"Half-human, half-machine, 100% killer. She is one of the most deadly moderators and is known for her killing capabilities."

"That bitch slaughtered my people, my family right in front of my eyes. I know I'll be going up creek through a river a blood if I want her dead. But she will pay, I'll make sure of it."

Little was known about her history prior to the Galactic Chat War, though it can be assumed she either got amnesia, or her memories were blocked from her accessing them. She was born on Epsilon Indus, and that was where she was killed by an explosion in the bombing of the planet. It is believed she once worked closely with Moderator Knightmare. However, she was killed by an explosion and was kept alive by being converted into an A.I. and saved by Knightmare. However, it is unsure whether he made her into a killing machine, and programmed her for a lust for blood, or if it is just how she normally is. She will sometimes refer to him as "Daddy" and is very protective of him. Her exact age is unknown but it can be assumed she was in her early 20s when she was killed. She loved the color blue and liked to dress in a punk sort of style, though no one was going to tell her how to dress. Miku was known to kill anyone who has questioned her or tried to hurt Knightmare.

It was later revealed by Commander Heathcliff that Hatsune Miku was in fact his little sister, and that she had also been friends with Sinon before her death. Commander Heathcliff had spent the 50 years after her "death" searching for her and trying to get her back and kill Knightmare, the person who supposedly changed her.

She had an intense rivalry with DMR, who's family she killed. Miku would lead troops into battle when it was needed, or act as a bodyguard or an assassin. She had an over shield that could stop a .50 cal round in its tracks and was an expert in hand-to-hand combat. Though she could use firearms, she preferred to use knifes and other close quarters weapons. Miku, when she could, liked to make her victims suffer before she killed them. She was an expert assassin, and would kill anyone who tried to get in her way.

Her whereabouts were presumed by Xytan 'Montrumai to be at Gaeto. However, Commander Heathcliff believed he knew her current location and said only Forerunner, Vidmas7er and himself knew her location. DMR4LIFE had also been searching for her, although he had come to the same conclusion as Xytan 'Montrumai, no trace of her and dead ends. Commander Heathcliff had set The Hecate to go to her location on his ship prior to him leaving on a mission on Gaeto. Sinon seems to trust completely in this regard; though DMR is more skeptical. Although by the time they had left, they were headed to an unknown location, likely using the admins for some sort of espionage, considering The Hecate left while attempting to be boarded by the crew of the Great Fox III, after disobeying orders and taking DMR prisoner.

After the a firefight on Catoonie, Knightmare self-destructed her, leaving Heathcliff distraught. However, it was rumored that Knightmare has more cards up his sleeve. Commander Heathcliff also believes that the Hatsune Miku destroyed on Catoonie was not the "original" Hatsune Miku, because she was missing something on her neck that no one could reproduce.

Another Miku bot was encountered by Andare and Sinon during the Battle of Eafth but was promptly destroyed by the pair. After this, none we ever seen again, though the fate of Heathcliff's sister was never disclosed. 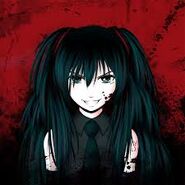 Miku with a shotgun

Miku
Add a photo to this gallery
Retrieved from "https://thdf.fandom.com/wiki/Hatsune_Miku?oldid=54472"
Community content is available under CC-BY-SA unless otherwise noted.